We are facing the biggest challenge the airline industry has seen so far. At CitizenPlane, we have developed a tool to help airlines maximise their load factor when flying becomes possible again. Here is our view of the situation and what we offer to help!

The situation is becoming critical for the tourism and airline industries. Cash is running out and everyone is activating every possible credit line they can; fewer aircraft are flying and fewer players have remained. Similarly to the US a few years back, the global market should consolidate.

Even though we are starting to see positive signs from China, nobody can know how the situation will evolve and how long the crisis will take to calm down. We can already say that it will probably take many years for a new paradigm to arise, never to go back to the past norm.

Here are some of the many questions that are still on the table.

How will offer be transformed?

On the offer side, let's be optimistic and look at the opportunities: could this crisis be a great way of restructuring?

We can already predict that the market will be reorganized and consolidated, especially in Europe. Depending on the duration of the crisis and the governments' willingness to help the tourism and airline industries, the market might be restructured very deeply and quite brutally.

We can expect the main carriers to get public funds to help them and to keep on thanks to their structure and cash in bank. In some cases, aviation is starting to be considered as a part of national assets for transportation, much like highways or the subway. Some governments will keep airlines alive in order to avoid economic damages. Italy has already taken full ownership of Alitalia, and Condor is in process of negotiating with the German government.

For the smaller actors of the industry, the situation will be more complicated. In the short term, thanks to government loans and financial facilities, airlines will probably pass the crisis. They will still have to restructure and check their strategy quickly in order not to go to bankruptcy the following year. That will be the real dangerous moment: when they start having to reimburse their loans and deal with the new situation.

On the demand side, it's even more difficult to predict what will happen.

On the medium term, will traveling legally be authorized between countries, or between continents? Will it be as easy as before to get a visa in the long term, as countries might become more reluctant to open their borders?

Business travel will most certainly take a while to get back on track. It could plunge on the long term following the development of new ways of working at a distance.

How will the tour operating sector evolve? We will probably be seeing a consolidation of stronger actors. This could be the definite end of gigantic, less adaptable companies: as we've seen with Thomas Cook, those who won't be able to adapt to travelers' new modes of consumption will be left aside.

We can hope that this crisis will bring a stronger ecological state of mind in the airline industry, after recent scandals concerning ghost flights. Rules could change to better favor the environment. This could also be the time when we stop using big, old aircraft to favor recent, less polluting, smaller ones.

All these challenges will have to be taken into account by airlines when business starts again, creating an even greater challenge than just surviving. At CitizenPlane we believe that the demand has to drive the offer and not the contrary.

What strategies can we recommend?

How can airlines adapt their revenue management strategy?

Availability strategies and pricing policies will be an over-sensitive topic when this all ends. It will be important for airlines to be in phase with the market in the early times in order to go back on track quickly.

The global demand will probably be lower than before, especially in the beginning. In order to maintain their load factor, airlines will need to reach out to new customer segments.

For airlines where business travel represents a huge part of their margins, new growth drivers will need to be found.

Competition will be different, with changing numbers of available seats on routes, different days of rotation and updated average market prices. Those are all items revenue managers will need to deal with, by testing new pricing policies. New ancillary services will be developed: for instance, some passengers might want to book empty middle seats, as they will be afraid of flying clasped together.

There will of course be many other operational issues to manage, such as pilots' licenses, aircraft maintenance, re-scheduling non-performed flights with booking vouchers and so on, but surviving will mean adapting strategically.

It's going to be a tough challenge dealing with these new references. At CitizenPlane, we believe our product can fit into the airlines’ pricing strategy now more than ever; as a virtual airline, we are part of the solution.

At CitizenPlane, we allow airlines to have a second pricing for the same seat under our name.

This means that an airline can continue selling their seats under their name at their normal price, whilst distressing the same seats at a lower price under the CitizenPlane brand when needed, on competitive routes. With this new pricing and our wide distribution network (120+ OTAs and metasearches worldwide), airlines will attract an opportunistic clientele that they did not use to reach. At the same time, they will keep selling their seats at their normal price under their brand name. 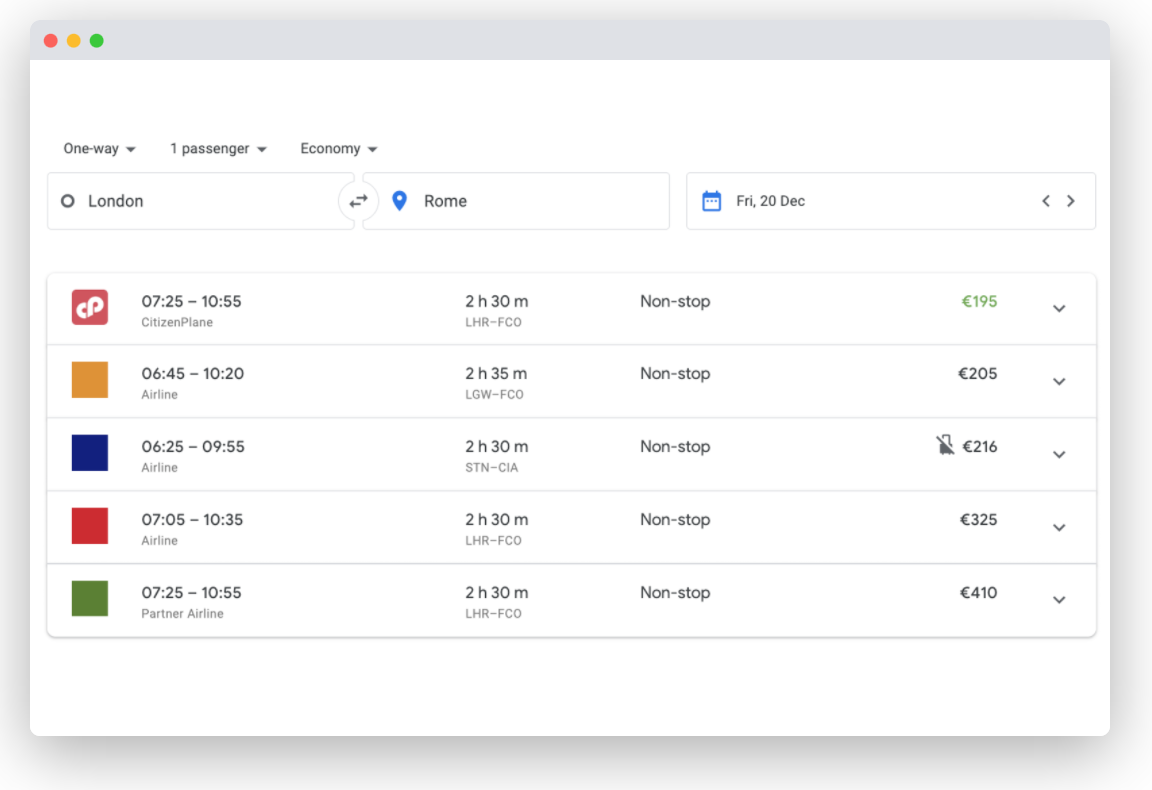 This way, they can do better market segmentation and improve their load factor.

We at CitizenPlane hope to allow airlines generate incremental revenue without dilution, as we focus on a new segment of buyers for them. This will help when they are able to fly again, at a time when they will most need to test new things and reach a high load factor.

Reach out to us to find more about our distressing tool for airlines!